Prediction about cryptocurrency 2018 – TeamLogic IT explains

Prediction about cryptocurrency 2018 appeared in The Economist volume 306, issued on January 9, 1988. It predicted that in thirty years Americans, Japanese, Europeans, and people in many other rich countries, and some relatively poor ones will probably be paying for their shopping with the same currency. Prices will be not in dollars, yen or D-marks but in, let’s say, the phoenix. The phoenix will be favored by companies and shoppers because it will be more convenient than today’s national currencies, which by then will seem a quaint cause of much disruption to economic life in the last twentieth century. 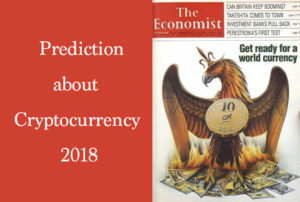 At the beginning of 1988 this appeared an outlandish prediction. But in 20 years, in 2008 Satoshi Nakamoto, the inventor of Bitcoin (although nobody ever saw him, because it’s just a nickname),  found a way to build a decentralized digital cash system. Although, in the nineties, there have been many attempts to create digital money, they all failed.

In contrast, Satoshi Nakamoto’s enterprise was successful. He built a digital cash system without a central entity. So now anybody, including you, can become a cryptocurrency miner. Under those circumstances there is no need for banks.

One major problem every payment network has to solve is to prevent the so-called double spending. Which means to prevent that one entity spends the same amount twice.

In that way every cryptocurrency miner needs to have a list with all transactions to check if future transactions are valid or an attempt to double spend.

Then, after confirmation a record about that transaction will remain forever. It is part of an immutable record of historical transactions. So, such transactions we call blockchain.

Only miners can confirm transactions. This is their job in a cryptocurrency-network. They take transactions, confirm them and spread them in the network. After that every node has to add it to its database. It has become part of the blockchain.

For this job, the miners get rewarded with a token of the cryptocurrency.

As you can see there is no place for bank or any other third party. No third party can have control over your transaction. And obviously those who used to control everything now are upset.

Nobody knows which one of many cryptocurrencies will take place of a world currency predicted in The Economist. People are buying Bitcoin, Ethereum, Litecoin, Ripple and other alternatives.  But one thing is for sure: Rothschild and Agnelli – The Economist owners – were pretty close in their predictions.