To describe the most likely cryptocurrency future let’s walk through a couple of scenarios. Certainly many people in Dallas are confused about blockchain technology and different types of crypto money. And as always the most absurd rumors appear among the people that don’t have a clue about cryptocurrency future. 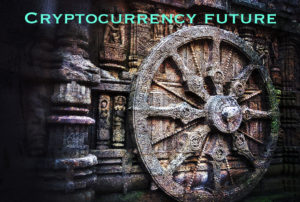 First of all, if you need to understand the basic concepts, please check one of our recent articles.

Will Bitcoin become the global currency?

Probably you’ve heard from some people that Bitcoin will become the global currency. Why Bitcoin and not any other competitor? Well, because Bitcoin has been performing better than any other currency so far.

So, let’s imagine Bitcoin is a currency people use all over the planet. And Artificial Intelligence is constantly watching and verifying all retail transactions. In effect people maintain their own private keys. If you lose your keys all of your life savings effectively vanish.

Under these circumstances fiat currencies died of hyperinflation. Of course banks died with them. The new generation prefers statelessness to any citizenship. Any way, we are the citizens of the world, we are already fine with that.

What is the likelihood of this scenario? Close to zero. Why? Actually, there are many reasons. First of all the majority of people don’t want to maintain their own private keys. But if somebody doesn’t want to maintain their own private keys, they need a third party like banks. In this case there is no big difference between cryptocurrencies and fiat money held in banks. Moreover the fact of irrevocability of crypto transactions makes cryptocurrency even worse than regular money.

Another key point is a credit. And it’s obvious that people like to take credits and live better life than they actually can afford. But credit and cryptocurrencies don’t get along well. Surely most people want strong governments. And governments on their hand want to have control which cryptocurrencies obviously don’t allow. So, this is not our cryptocurrency future. Sorry, if we disappointed somebody.

Imagine, you are in the future and Bitcoin did not win. Ethereum did not win. Ripple did not, Litecoin did not. We still use credit cards, dollars, euros, yuan, and many more currencies. As we used to. Investors might use some blockchains. But overall no revolution happened. It is true for the majority of the population, let’s say for 98%.

But there is always a minority. Even if it’s just 2%, it is equal to about 140 million people. And those people want to deal with blockchain not with banks. And they are keeping their private keys. Given that, this minority of people are using cryptocurrencies for their day-to-day expenses and long-term savings.

With this in mind, we can come to the following conclusion. The vary fact of existence of such cryptocurrency alternative stimulates all the other currencies to remain honest. Because if that 98% of people become unhappy they will definitely look at the crypto alternative.

What is the likelihood of this scenario? Let us be optimistic. It’s very likely, based on today’s situation.

TeamLogic IT of Plano, TX is part of a fast growing nationwide network of businesses offering state-of-the-art solutions to small and medium-sized organizations. Through consulting services and a comprehensive array of services, TeamLogic IT addresses the needs of all levels of IT systems.